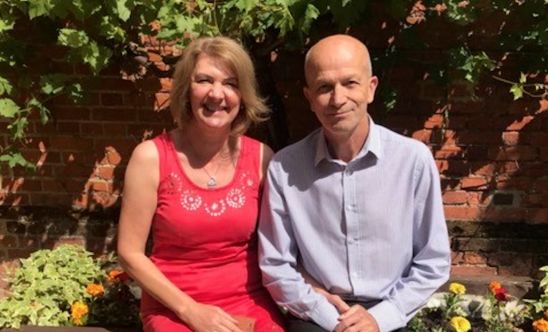 Today, we talk to Chris Roberts and his wife, Jayne Goodrick.

Chris chairs Alzheimer Europe’s European Working Group of People with Dementia (EWGPWD), which is composed of 14 people with dementia from different European countries nominated by their national Alzheimer’s Associations.

The EWGPWD actively contributes to many projects through public involvement work, partnering with dementia researchers to ensure the research is valuable and meaningful for people with dementia. EWGPWD members will form part of the Patient Expert Group in EPND.

Chris is living with mixed dementia (Vascular and Alzheimer’s), which was diagnosed in 2012. Since his diagnosis, Chris and Jayne have campaigned widely to raise awareness and dispel the stigma around dementia.

We talked to Chris and Jayne about their perceptions of research and data sharing, the importance of involving people with lived experience, and what they have gained from research.

How did you first get involved in research, and what did you gain from that experience?

Chris: I first got involved the year after I was diagnosed, in 2012. The local memory assessment service was working with a nearby university on a research project. It was a little project where a group of us got together and spoke about our experiences since being diagnosed. Before that, I didn’t know that research could be non-invasive! But you don’t know what you don’t know - like biomarkers, which can come from brain scans.

After that project, I really got engaged in research. I participated in research studies, and also did public involvement work with the EWGPWD. This gave me hope, where there wasn’t any before. It also gave me focus, and it improved my confidence. It broke down assumptions and barriers that once you get diagnosed, you can’t function on your own. You just need support, understanding, and reminders.

Jayne: When Chris got his diagnosis, I couldn’t even say the word, “dementia”. I changed his diagnosis title from vascular dementia to vascular degeneration, because I could not accept that he had dementia. It was only when we became involved in research that things changed. We said yes, but I was very cynical about the project, because it was about what people with dementia can do and learn. I had used Dr.Google, which told me that when you have dementia you just go downhill.

Getting involved in research shifted my mind totally, it taught me so much about my ignorance about research. As Chris says, we thought research would only be invasive. We didn’t realise that sometimes it can just be a blood test, it can be a non-invasive procedure like a brain scan. That really opened my eyes to what research could do.

And then we became very keen on doing as much research as possible. When Chris was first diagnosed, I wanted a cure. I didn’t realise what psychosocial research was, what biomarkers were, I didn’t realise what options existed. So, this simple 8-week project, where people with dementia met once a week, really opened our eyes. Because we met and spoke with people with dementia, and they were quite normal, just like us!

Since then, you have really championed research, working with the UK Alzheimer’s Society, Alzheimer's Research UK and Join Dementia Research to raise awareness. What would you like people to know about getting involved with research?

Chris: I really think that research is something everyone and anyone can join in with – IF they know about it. Also, people should know that they’ve got nothing to fear, you can be engaged a lot or a just a little, and you can stop at any time. Once people know that, and know how research works, they are a lot more likely to get engaged and take part. And there are so many benefits to being involved!

Jayne: For me, research fast-tracked me into acceptance of Chris’s condition. When he got diagnosed, I became a carer overnight, wrapping him up in cotton wool, trying to keep him safe.

After we got involved with research, instead of railing against it, looking for a cure, we just got on with things. Because dementia wasn’t as scary as we thought it would be. I started managing my interactions with Chris much better. And I learned that Chris could learn new skills, and actively participate, whereas previously I had just been watching for the decline. Now, we just take things day by day. We don’t look for the losses, we just look for the wins.

Chris: It is very difficult to take an interest in things you have no knowledge or experience of! So, it’s really important for researchers to talk to people with dementia about their work. And this helps everyone involved.

But when you talk to us about research, treat us normally, and speak to the person with dementia, not just their caregiver or supporter. Don’t be patronising, or make assumptions: people with dementia can also be (or might have been) researchers, scientists and professors! Use clear explanations, and tell us the whole story – not just what you think we need to know. If we’re participating in research, give us a single point of contact we can speak to. And if it is going to be a long-term interaction, let’s have a meeting where we can introduce ourselves as individuals, so we can relate to each other better.

Finally, understand that there is “nothing about us, without all of us”. Researchers and scientists need research participants, and experts by experience: they can’t do it all on their own - and neither can we. But by working together, we can change the world.

Jayne: Before Chris’ diagnosis, we weren’t aware of any sort of research apart from what you read in newspapers or see on TV. It was only when Chris had this life changing diagnosis that we found out about research, and started getting involved.

My advice would be to use layperson language and terms when you speak about research. At the beginning, you have no idea what some of these words mean. Tell us what the research is about in a very straightforward way, what the end result might be, and how that might impact me. Also, speak to me, Jayne Goodrick, not “the research participant”, and keep people updated on progress: people become more engaged and involved, if you make the effort to communicate well with them.

EPND is developing a platform to help researchers share data and samples from clinical studies on neurodegenerative diseases like dementia. How do you feel about data sharing?

Chris: Data sharing is absolutely the way to go. As long as your privacy is protected and the data is anonymised, they should give access to everyone! If I participate in research, I want my data and samples to be used as much as possible. I want to be asked, but I will agree to every use of my samples and data.

If you look at research as education, how can you progress if you don’t share data and learn from previous research? We all need to work together to accelerate innovation and progress, and that includes sharing research data and samples.

Jayne: I totally agree. I’ve learned that research can be much more efficient, if we make the most of the data that already exists. So, if you already have samples or data from me, reuse and repurpose them! I want them to be shared. And I’d be very happy to sign a document which says my data and samples can be reused for any ethical purpose. That way research can be more streamlined for everyone, and we will all benefit.